The cosmetics division is forecast to grow at a compound annual growth rate (CAGR) of 35.5 percent from 2006 to 2012, while the domestic cosmetics market will likely increase by 10 percent to 9 trillion won in 2011.

The company is expected to capitalize on domestic growth momentum, thanks to the expanding private brand market, the growing male segment and increasing demand from domestic firms, which are venturing into global markets without production facilities.

Furthermore, its Chinese subsidiary's sales are forecast to reach 10 billion won in 2011 and earnings should turn to black in 2012. 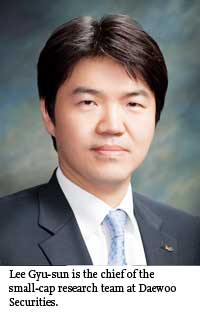 The company boasts of a higher R&D-to-sales ratio over 6 percent as of 2009 than major cosmetics companies, which is 3 percent of Amorepacific and 2 percent of LG H&H. Forty-percent of domestic sales are to ten top-tier clients, including Amorepacific, LG H&H and The Face Shop.

Exports which consist 100 percent of sales are primarily attributable to multinational companies, such as Johnson & Johnson, Herbal Life and Nu Skin.

As it is Korea's only pharmaceutical ODM contractor, business is booming. The company can manufacture more items at its GMP-certified production facilities.

In light of its competitive operating profit margin and attractive valuation, the company should merit investors' attention. Kolmar might deserve an additional premium going forward, considering the high growth potential of the pharmaceutical division and Chinese subsidiary.

Lee Gyu-sun is the chief of the small-cap research team at Daewoo Securities.