Few can refute that violinist Chung Kyung-wha was the first classical musician from Korea to achieve true international stardom in the 1970s and 80s.

She is the centerpiece of the Chung Trio, consisting of her older sister Myung-wha on the cello and younger brother Myung-whun on the piano. In Korea, they are like the Kennedys of classical music.

The violinist is unique in that she is not just an Asian pioneer in Western classical music. Before her sensational 1970 London concert debut, there were few women instrumentalists. Like pianists, star violinists of the day were overwhelmingly male.

In the 1970s, larger-than-life violinists like Jascha Heifetz, David Oistrakh, Nathan Milstein and Yehudi Menuhin, among others, were dominating the stage and recordings. Chung had it much harder than younger Korean classical musicians who followed her footsteps. 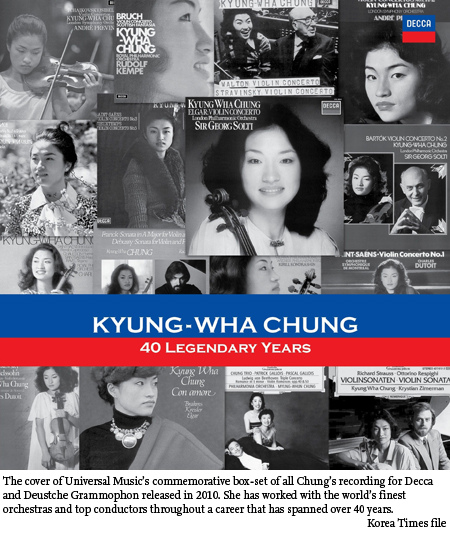 Born in 1948, Chung's earliest musical studies began not on the violin but on the piano.

The late 1940s were hard times for most Koreans, who had just been liberated from the 35-year Japanese occupation. Chung's late mother Lee Won-sook, who ran a restaurant in Seoul, rented a Yamaha piano for her children to practice on.

Even during the Korean War (1950-1953), when the Chung family had to move temporarily to Busan to escape the war, Lee made sure to pack the piano in their moving truck.

"I believe that my talent was from God. But it was my mother who managed that talent," Chung said at a press conference shortly before her return to the stage in March after a 6-year absence from concerts due to a finger injury. 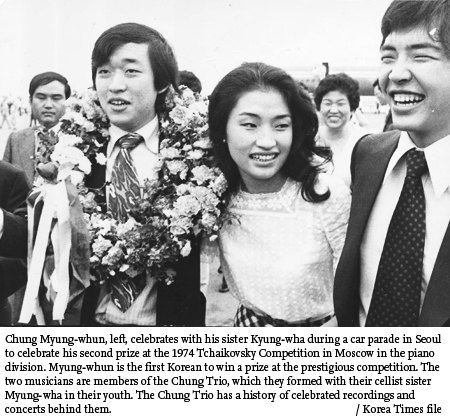 Chung started on the violin around age 7 and by 13 she had arrived at the Juilliard School in New York as a pupil of celebrated teacher Ivan Galamian.

Other Galamian students included Israeli violinists Itzahk Perlman and Pinchas Zuckerman, who are among some of the most respected violinists of the 20th century.

Chung had wanted to participate in the Tchaikovsky Competition in Moscow, but because of the strained relations between Korea and the Soviet Union, she was not able to participate. Instead, she chose to go after the Leventritt Award, the top U.S. violin prize and in 1967 won after a mesmerizing performance of Beethoven's Violin Concerto in D major in the final round.

As laureate of the competition, she automatically had engagements with nine major U.S. orchestras and recitals across the United States, leading her to become one of the most successful female violinists of all time. 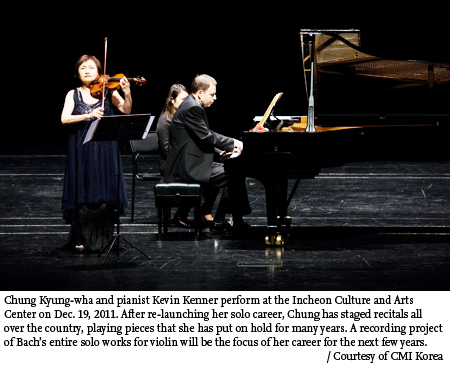 But her career did not truly take off until 1970 when she stepped into replace Perlman for a concert with the London Symphony Orchestra (LSO). This led to an exclusive recording contract with Decca, the first for a Korean artist.

In 1988, Chung was selected by Time magazine as one of the world's top five female violinists along with Anne-Sophie Mutter (Germany), Viktoria Mullova (Russia) and Nadja Salerno-Sonnenberg (the United States) and Midori (Japan).

One of the achievements that sets Chung apart is an illustrious discography unlikely to be matched by many violinists.

At a time when there were few female instrumentalists exclusively recording for major labels, Decca signed Chung shortly after her London debut. The first recording was the coupling of Tchaikovsky and Sibelius concerti with the LSO under American conductor Andre Previn.

Decca's excitement in contracting her is evident from a tribute by Ray Minshull, former head of Decca's Classical Music Department from 1967 to 1994, for the re-issue of her 1972 Bruch recording in 1998.

"I had no doubt whatsoever that at last we had found the person to fill to perfection one of the most glaring vacancies in our artists' list — that of an outstanding solo violinist," Minshull wrote. "She is able to draw from the lower three strings of the instrument a range of emotions which I have heard from no other."

The last few soaring bars of the songful second movement of the Bruch concerto clearly illustrate the unique sound Minshull spoke about.

As an exclusive Decca artist, Chung was able to work with the top conductors of the day including Georg Solti, Charles Dutoit and Rudolf Kempe among many others.

"She quickly became one of the most characterful and best-loved violinists in the word. The total involvement she conveys comes not just from the actual notes but from her physical stance, revealing her love of the music and of the violin in every movement of muscle," Edward Greenfield, a former music critic for the Guardian and Gramophone, wrote in the introduction for the aforementioned Bruch disc.

"Yet today, even when faced with the most spectacular showpieces, she will deny that she is a virtuoso; for her, technique is merely incidental to the quintessential act of communication through the medium of music."

Chung stayed with Decca until 1988, after which she moved to EMI to make a series of celebrated recordings. Her recording of Bartok's Violin Concerto No. 2 alongside Rhapsodies Nos. 1 and 2, with the City of Birmingham Symphony Orchestra and Simon Rattle, earned the coveted Gramophone Award.

At EMI, she revisited some of the works that she had recorded previously for Decca, like those by Beethoven and Bruch.
In 2010, a commemorative box-set of all Chung's recording's for Decca and Deustche Grammophon was released under the title "Kyung-Wha Chung: 40 Legendary Years" to mark the anniversary of her first Decca album.

As a recitalist, Chung has collaborated with an extraordinary list of artists, including pianists Radu Lupu, Krystian Zimerman, Peter Frankl and Stephen Kovacevich.

Her heydays were definitely in the 1980s and 1990s, but as an artist she has constantly matured. Chamber music has played an important part in her musical growth, particularly in the 1990s.

She has recorded and toured extensively as a member of the Chung Trio. Their EMI Classics recording of Beethoven's Piano Trios Opp. 11 and 97 (Archduke) released in September 1994, has received great critical acclaim. The Chung Trio also served as honorary ambassadors for the United Nations Drug Control Programme and played many concerts in this capacity in the 1990s.

Conductor-pianist Chung Myung-whun is a pioneering musician in his own right as the first Korean conductor to achieve international fame.

He was the first Korean to win a prize at the Tchaikovsky Competition in the piano division in 1974. He was also the first Asian to make a mark as an internationally-acclaimed opera director.

Opera has been hugely important in the development of Myung-whun's career in Europe, where he made a name for himself as a director of the genre in the late 1980s and 1990s. He is well-known for conducting operas from memory, as he did during a performance of "Simon Boccanegra" with the Vienna State Opera last year.

An exclusive Deutsche Grammophon artist, Myung-whun will conduct Wagner's "Tristan and Isolde" and "Othello" in Italy this year.

Early this year, Kyung-wha re-launched her solo career, staging a series of recitals in Seoul and other cities.

A key legacy of the latest phase of her career is the recording project of J.S. Bach's (1685-1750) sonatas and partitas for solo violin, called the "Bible of the Violin Repertory."

For 30 years, she has recorded most of the major pieces for the violin and chamber music from Vivaldi to Prokofiev. But she shunned recording Bach's solo works, saying that she would wait until she was ready to take on the monumental challenge.

She recently completed a 4-part recital of the program on May 15, 22, 31 and June 4 at Myeongdong Cathedral.

Completed in 1720, the revolutionary set of six works (three sonatas and three partitas) firmly established the violin as a solo instrument. They have served as an archetype for violin pieces for the following generations of composers including Eugene Ysaye and Bela Bartok.

As she advances in age, the 64-year-old has shown more interest in nurturing younger violinists.

Since 2006, Chung has been teaching at the Juilliard School.

Based in New York, she also has a home in Seoul and serves as the artistic director of the Great Mountains Music Festival and School, which will take place from July 21 through Aug. 11.